On The Road: Haddonfield and Cape May (Complete with Photos and a New Song)

Aaaaand we're back, after another whirlwind weekend! So nice to be home, though hanging out in sweatpants and doing laundry is quite a change of pace.

My first stop was Haddonfield, NJ, to play at Jersey Java and Tea. It's supposed to be a 90 minute drive, so I picked up my car (a tiny lightweight Honda Insight hybrid that gets rattled as larger cars speed by) around 3pm. We'd packed it up by 3:30pm and I was feeling confident we'd get there plenty early. But first I had to drive in Manhattan again. I have a weird inability to properly use my horn, so more than once Sam had to reach over and hit it for me, especially when I had to slam on the breaks because some truck misjudged his ability to pull out into traffic, but we got off the island little worse for wear (except that maybe I'd made Sam a little crazy).

I've been trying to cut back on coffee, but driving is a special circumstance, right? When we made a stop for gas, I got a soy latte and I must say it was delicious. Also I find New Jersey's policy of only full service gas stations to be a little unnerving. The attendant couldn't get my Zipcard to work and since I couldn't test it myself I couldn't tell if it was the card or him! And it takes longer, and there's always so many cars in line… /rant

The drive through Jersey didn't seem that long, but it was 6:30 by the time we arrived at Jersey Java. Oops. I had 30 minutes for a quick soundcheck and to change out of my driving clothes. Then I'd left my makeup in the car and had to apply it in the rearview mirror and hope I didn't look like a clown. 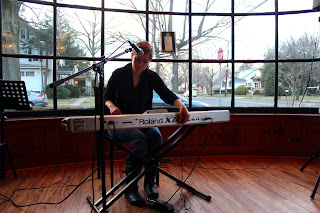 I started playing around 7 and it sounded surprisingly great in there! I pulled out some of my favorite "deep cuts" ("A Thousand Miles" anyone?) and played continuously for two hours. Some strangers wandered in and sat attentively on the couches facing my keyboard. One guy even stayed the whole time. 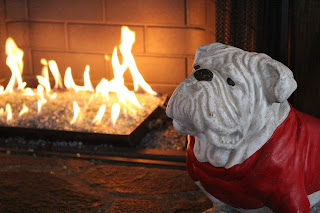 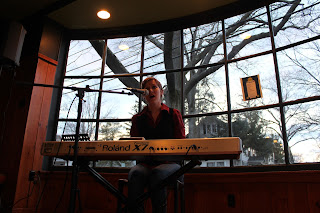 The baristas offered to have me back, which is always a good sign since they don't have much choice in listening. Some friends showed up near the end so we stuck around after the show talking to them and drinking more coffee (I had more driving to do, okay?!).

We left at 9:30 and scarfed down some lentil rice salad in the car before hitting the road again. I usually get pretty hyper after a show, but I was unusually hyper from the combination of adrenaline and caffeine as we drove down to Cape May. We jammed out to Marina & the diamonds and Ellie Goulding (and maybe Lady Gaga, don't tell) and I was bouncing in my seat, feeling pretty jittery and goofy driving in the dark.

We arrived at the Merion Inn around 11:15 (again, 30 minutes before my set). I walked in with a pretty huge backpack on but the room was set up so that we would have had to walk right in front of the performer before me. So of course I backed up and completely knocked over the hostess's stand, disassembling a lamp and spilling all sorts of menus on the floor. It's not a party until Jana knocks something over, right?

I was the last performer of the night, but the dozen or so people there were incredibly attentive (besides the couple making out at the bar, who were attending to each other). My friend Allison Tartalia from back in the DemoTape days was there, having played earlier in the night. I had different sets planned out for each night at Cape May, so this one was a combo of soft/pretty and super dark. I played a new song called "The Clincher" which I had thought was a bit of a weird one, but it was really well received.

I loved that piano and that room. Sam ordered tea and the owner brought out a whole box of herbal teas for her to choose from. I ordered Coke which was actually RC Cola (more caffeine!!!!). I said hi to the other performers and then we headed to the hotel.

We checked in at 1am and discovered that our hotel room was actually a suite with a full kitchen. The best use we made of it all weekend was to make ramen (actually a Trader Joe's rice noodle bowl, but you get the picture) which we ate that in front of the TV in our pajamas. We were both too wired to sleep so instead we watched Employee of The Month, me without contacts in (I'm blind enough that I couldn't really see anyone's facial expressions) until finally falling asleep at 3am.

Getting out of bed the next morning was torture, but we dragged ourselves to Bella Vida Cafe where I could actually order a tempeh reuben with Vegenaise and a gluten-free wrap. Delicious! After that we drove around a while, walking on the beach and freezing, driving by beautiful Victorian houses so Sam could take pictures, and then walking down the pedestrian mall and ending up at a coffee shop called Magicbrain Cybercafe (welcome back to the 90s!) with a little upstairs loft where we sat a while. 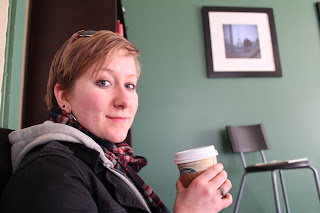 We attended a couple of conference sessions and then had dinner. My next set was in the main bar that was sort of in the center of everything. I got changed and I must've looked the part because a nice couple bought a CD without even hearing a note. (I couldn't talk them out of buying A History of Sleepwalking though, so who knows if they'll be back.) Everyone in that room was chatting and having a good time when the performer before me got out from behind the piano, stood on a table, and recited a long poem. Awkward…

I played my set, having a hard time staying focused because of all the people chatting, saying hi to me behind the piano, and putting cameras in my face. No one seemed to notice though. Allison Tartalia was after me (same bill again!) and then we headed back to the hotel.

As always, I loved getting out of the city to play. Even if out-of-town shows are under-attended, the people are always so appreciative and open to new music. Take that, New York! :)

Have you ever been out with friends, laughing and dancing past midnight, and felt so alive that the rest of your life seemed to lose its importance in comparison?

Not that staying out late isn't fun. It is. But I think that we youngsters, especially we youngsters who escaped from a small city to a larger one, have a tendency to think that going out is important.

It's important to us that we create a life different from the one we had before, be that a small town life or just a conflicted teenage life. So we try to "experience life to the fullest" and pepper our conversations with "YOLO." We're not really sure what that means though, so we throw ourselves at big city experiences with the intensity you're supposed to reserve for your life's work, seeking out new spaces to have 5-hour alcohol-fueled conversations with friends until we have to drag ourselves to the subway to go home. We tell ourselves we're living large.

What if we're missing the point? What if blowing off all this steam is a poor subsitute for creating the life we want?

Maybe living in the moment isn't going out on a Tuesday; maybe it's sitting in meditation and feeling peace in the silence. Maybe living large isn't spending all your money to feel cool at a club; maybe it's chasing your dreams and doing the hard, foolish work to make them happen.

In our twenties, we feel like we have to pack in all our living because once we get "old" we'll turn into family/career zombies, so we pour all our energy into these fun times we think are what we're supposed to do in our twenties. But what if twenties-style fun actually facilitates us becoming zombies later? What if we poured our energy and young foolishness into having impractical goals and creating the life we want, a life that we'd want to live even when we're "old?"

After all, you only live once.
Posted by janafisher at 2:18 PM 10 comments: