On The Road: Philadelphia & Harrisburg

Wow, what a whirlwind! This weekend was a number of firsts for me: first Philadelphia show, first Harrisburg show, first time driving a car in Manhattan, first time being an hour and a half late for soundcheck, first time losing my laptop…

I love driving, but I've been terrified of driving in Manhattan ever since I got here. I'm the person who closes her eyes when the cab I'm riding in swerves in and out of lanes to avoid traffic. When I picked up my Zipcar (a cute red Ford Focus hatchback named Fettucine) on Friday afternoon, my heart was pounding and I was muttering nonsense to myself the whole time. Once I picked up Sam in Tribeca, I was hit by a wave of "Yeah! I can do this!" Scratch that off the bucket list! 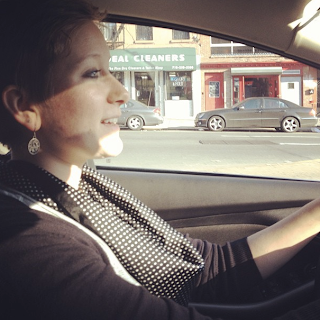 We crossed the Brooklyn Bridge to pick up Brett and his keyboard. The car turned out not to have the amount of storage space I thought it would and for a time Brett was sitting cross-legged with the keyboard where his feet should be. By the time we picked up James, another rather tall guy, we figured out we could put one of the seats down and make the two men sit next to each other in the backseat.

We hit crazy traffic on Staten Island, and for a while moods were still high and the guys were jabbering away. After about an hour of sitting in traffic, I said "Uh, I think we're going to miss soundcheck. It's 4:30 now and we're supposed to be there by 6." Brett called MilkBoy and let them know we'd be there around 7, but that sounded pessimistic to me. Unfortunately we hit more and more traffic and then missed an exit because Siri doesn't speak loud enough to be heard over music and man voices, so by the time we got there I was stressed and jittery and it was actually 7:20. Thankfully the headliner was late too! Brett and I had a simple setup and just had to line check so it was all good.

Brett played first, and it was nice but also surreal to watch him play. I'm so used to singing on stage with him and I know the words to all of his songs! For once I got the chance to observe his passion from the audience and I really enjoyed it. He dedicated his new song "Expiration Date" (one of my faves!) to me while I ordered tofu scramble before the kitchen stopped serving food.

After my set I scarfed down my breakfast-for-dinner and sat back to watch soul singer Brian Owens. We said goodbye to most of our Philly friends, checked into our hotel in Old City, and then went out for midnight tapas at a swanky 50s-style diner/lounge. In New York, a place like that would've been packed, but they sat all 6 of us without a wait! By the time we left, the Philly scene was winding down and we were amused by all the drunk girls losing their shoes as they tried to hail cabs home.

Saturday morning we checked out of the hotel and had a lovely brunch (tofu scramble and vegan chorizo for me!) before Sam and I left for Harrisburg. We drove through Lancaster County and passed signs for places like "Dutch Wonderland" and "Noah! The Experience." We got to Harrisburg in time to attend one conference session, "Mistakes Musicians Make" by producer Jason Rubal, which gave me a new perspective on focus and work ethic. I made myself give him a CD which was torture for me since I'm not a salesperson at all, but he was nice about it. I've been thinking about his session ever since.

Back at the hotel, I went to get out my laptop to find a place to have dinner. Because of my dietary restrictions (gluten free vegan FTW), I had researched restaurants beforehand and I knew there was a list on my computer. I looked into my backpack and froze. The laptop slot was empty! I was so busy making sure no one else left anything in the Philly hotel that I had left my own laptop! Trying to stay calm, I called the last hotel and fortunately they found it in the room where I'd left it and held it for me. Whew.

The venue where I played was a beautiful restaurant in downtown Harrisburg with a gorgeous grand piano. I slowed down my songs to fit the mood of the place and was well received. 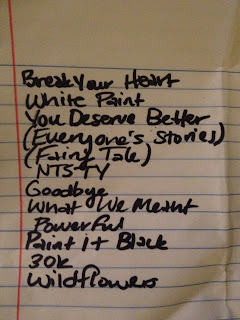 Afterward we hung with a friend of Sam's from college and two women at the bar stopped by to get a CD. I was impressed with all of the other singer-songwriters who played after me. Such talent in this world!

Sunday morning, we drove back to New York (stopping in Philly to get my laptop, of course). Once home we immediately took a nap. I was exhausted! But I loved driving, getting to see new cities and old friends, and playing for new people. There's a sense of freedom in traveling like this, but also a sense of connectedness. Everywhere you go, there are people who connect to music and will appreciate what we do. Hopefully we can do this again soon!

Getting Out of Town

New York is a wonderful music community. There are hundreds and hundreds of shows going on here every night, venues for every genre (except maybe hardcore), and other musicians at your level no matter what level that is. For the most part, I love it. But New York infects music fans with the paralysis of choice. How can you ever pick just one show per night when there are so many? How can you enjoy the show you're at knowing you rejected so many others to be there?

When I played in Pittsburgh with Achordial Brio and Jennifer Vazquez, I was shocked at what respectful music fans lived there. The people packed Cannon Coffee for artists they had never seen before and they listened attentively to every note. In New York, the same show would've been played to a third the number of people, and they all would've been yelling over the music or checking their phones. And here I had thought such apathy was a universal experience.

So every now and then, I like to play out of town. Not just to meet new people and hopefully make new fans, but to put things back in perspective. If you've ever lived in NYC, you'll know that there's a constant feedback loop that makes everyone think they're living at the center of the universe. In reality, we just live in a different universe. No better, no worse, just different. Every now and then it helps to look from the outside in and see that again.

And so we're off! To Philadelphia, to Harrisburg, to Cape May. To play for new ears, to meet new folks, to see the country, to put things back in their place. I hope you'll join me!

Visit the shows page for more info.
Posted by janafisher at 2:16 PM 9 comments: