The EP is out! I hope you are loving it and that the songs are old friends by now. I had my first-ever audio interview this weekend — for Higher Plain Music's new podcast — and we talked about how the three songs on Ideals & Deals are meant to be distinct characters whose stories round each other out. So when you hear the EP, you make not just one new friend, but three. :)

The EP release show was great! Derek entertained us with his piano wizardry and Jen made our guts wrench with her soulful singing. I loved seeing so many old (and new!) friends that night! 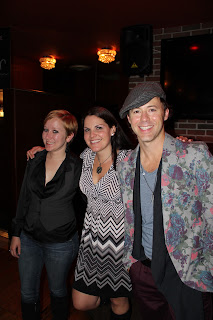 Me, Jennifer Vazquez, and Derek Bishop

If I were a normal person, living in a normal city where people could afford things like cars and parking was free, I'd tour. Not a lot, just like, on weekends to do stuff around the Northeast. As it is, I'm going to make it back to DC (yay!) and hopefully some new places like Philly and Boston. (If you have any venues with pianos to recommend, please do! Makes my life a 124,234,124,984 times easier.)

In November, I'll be playing a long afternoon set at Kávé in Bushwick, where you can have some coffee and hear some "deep cuts," and a show at SideWalk, which I plan to record and release as a live album! (Unless it sucks, in which case, forget I ever said this.)

Beyond that, I'm already planning on another EP for early 2013, tentatively titled Torch and containing 4-6 songs— probably "Nothing To Say To You," "What We Meant," and "Wildflowers," for sure.

It's weird— I expected I'd feel some sense of accomplishment once the EP came out and the release show was over. As it is, I can't stop thinking about the next thing. But I suppose not obsessing over what I can't change and looking forward to the future is its own accomplishment in itself. :)
Posted by janafisher at 8:09 AM 11 comments:

It's here! Ideals & Deals is officially a thing. Download it for free here!

Your download comes with liner notes that include photos from the "30k" video, lyrics, and credits, so you'll be all set for that Ideals & Deals sing along party you were planning.

If you're old school, I've got little homemade Ideals & Deals CD packages for sale on Bandcamp.

I've had so much fun with this whole adventure— from recording the EP over three jam-packed days to shooting the "30k" music video to making homemade CD packaging— that I don't know why I didn't do this sooner! Thank you for everyone involved in the recording process— Brett, Brian, Elliott, Shawn, Ali, Perry, Richard— for helping my spazzy self make something to be proud of. And thank you to everyone else who has encouraged me at any point whether you realized it or not. It's because of you I haven't quit music to become a lawyer (or a monk).

If you're in the NYC area, you should party with me next week to celebrate the EP release! I'm joined by my wonderful and talented friends Derek Bishop and Jennifer Vazquez at Gizzi's in the West Village. Come have dinner and a show and get a free CD!

I'll be the one wearing the silly grin all night.