Writing My Own Story

Being a one-woman operation here, getting ready for an EP release means that I do everything. I'm the webmaster, the graphic designer, the publicist, and the distributor, as well as the singer/songwriter/pianist/producer. It means that when I have a particularly bad case of insomnia, I use the extra hours awake to redesign my Myspace (yes, I haven't recognized that site's futility enough to delete mine yet) and decide on a font for the EP cover.

It also means that I have to write my own bio.

Writing my own biography is hard. Not just because it's awkward (though also amusing) to quote myself. But because so many different stories make up my life and I have to choose just one arc, make it neat, and have it end sounding like I've arrived at some destination of maturity/self-actualization/blah blah.

I'm an introvert with many floating "free traits" that I'm in the habit of presenting in different combinations. I'm used to telling different parts of my story to different people. And now I have to choose one and let it be how the world sees me?

I choose the preacher's kid arc because it's the most concrete. It's something unique about me— much more interesting than, for example, the story of struggling to be okay with doing music rather than continuing to pursue academics— and it's a big part of my identity. But it's hard to convey that story to people who haven't lived it. The bio makes it sounds like I've built my identity on rebelling against that role, but that's not it. I still play that role every day.

The problem with making that "my story" is that it makes it seem like the book is closed. In reality it's hard to make understood something that I don't even completely understand myself.

I guess that's why most people wait until the end of their lives to write autobiographies— to have the insight that comes with hindsight.
Posted by janafisher at 8:54 AM 96 comments:

Behind the Scenes of the "30k" Music Video


Apparently non-bicyclists don't realize there's a park at the Brooklyn entrance to the Manhattan bridge. Whoops.

I learned that the hard way when we were supposed to meet there to shoot the "30k" music video and both Bill the director and Asia the makeup artist got lost. I just sat there quietly practicing my Zen.

The main concept for the video is that I cross the Manhattan bridge as a wide-eyed and hopeful transplant and change clothes for each verse as I try harder to fit the mold of what I think will make me a city girl. We decided to shoot the part on the bridge first because it we were trying to beat the rain.

It started raining the second my makeup was done. But that's okay, wet concrete looks awesome!

For verse 2, I turn super hipster with my little fedora and vest and junk. By then it had stopped raining. Go figure. 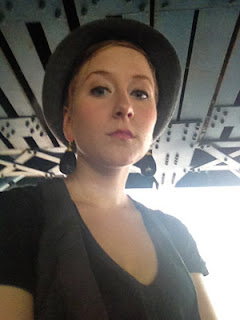 I was nervous about verse 3 because I'd be putting on clothes I'd never wear under normal circumstances. For one, I don't wear heels. Period. Because I'm a huge klutz. I come within inches of spilling an entire water bottle on my computer about once a week. But I had 4+ inch clonkers to strap to my feet. Then I was supposed to wear this tiny dress, fake eyelashes, and the whole nine yards. I changed under the bridge using a huge t-shirt (during a red light, of course. ugh) and then kept the t-shirt on to get my makeup done. 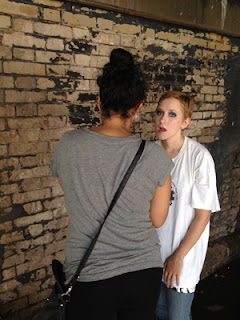 This is actually a music video about glam zombies.

But once the transformation was complete, I had fun with it. I almost believed it could work (until I had to walk anywhere. Those awful shoes kept me grounded). 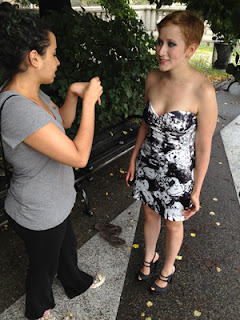 Verse 4 took place after a long night out, all that beautiful makeup smudged. I looked terrible. 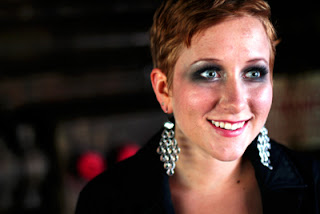 I swear I'm not crazy! I just had my eleventh cup of coffee!! Isn't that awesome???

Then woohoo! The hard part was done. Asia took off my makeup so I could breathe and go eat vegetarian meatballs.

We competed with a couple taking their wedding photos near Brooklyn Bridge Park in Dumbo so I could be an incognito hoodie-wearer carrying a suitcase. Obviously the video shoot was way more important. Duh! 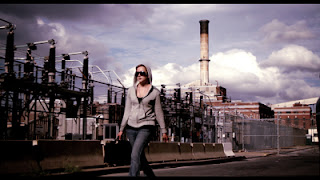 Wouldn't you want your wedding photos taken in front of a lovely power plant?

Then we went back to Bill's apartment so I could play the narrator — a nice girl in a dress singing into the camera from a basement. 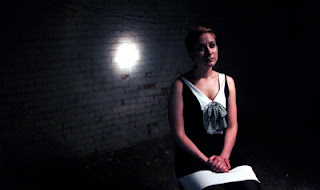 There's a spotlight halo behind me. Just another day at the office!

It was 8pm when we wrapped! So we went down the street for dinner and celebratory drinks. It was a carnivore restaurant so I had braised collard greens and roasted potatoes and a cocktail called Hemingway's Daughter. (Why didn't I take pictures of my food??)

I've developed this sort of jealousy that actors get to be different people all the time while I only get to have one life. But a music video is sort of a mini trip into other realities! I can't wait to share it with you (and do to it again).

Many many thanks to director William Murray (who also took these photos) and makeup artist Asia Werner for being super troopers and otherwise awesome! 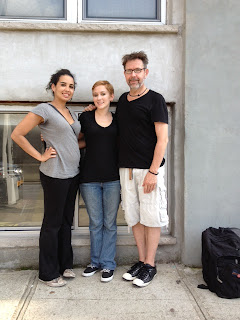 
I feel unprepared for good things.

Good things are easier to manage when they're far off in the distance, when they'll be ours sometime in the future when we meet some unattainable standard of worthiness. We spend so much time dreaming about them but keep telling ourselves we just aren't ready.

And then a good thing happens. And while we love it, it's scary. It hints at other impossible things. It demands that we stop making excuses for why we don't deserve the things we want and actually go after our goals.

Sometimes it's easier to reject the good things that come our way so we don't have to leave our comfortable anxiety. One good thing has the power to ripple through our entire self-perception and completely change a life.

I always had a thousand reasons why I wasn't ready to make new music. Now that it's finished, I feel like it was waiting for me all my life. What seemed like a Herculean task before I started ended up feeling entirely natural— a thing I will do again and again and again. A thing that opens the door to more adventures, more dreams.

We all come up with reasons why we're not special enough to have the things we desire most.

But guess what? We are.

The Political is Personal


If the personal is political, and my songs are personal, then…

I usually refrain from ranting about politics, first of all because I feel like I'm not qualified. The closest I came to studying poli sci was History of French Civilization. I mean, come on. And secondly I feel like there's enough ranting in the world and I don't need to add to it.

Unfortunately, tensions are high in an election year, and in the Facebook era that means getting bombarded with everyone's off-the-cuff opinions and articles that support their viewpoints. I log on to the Book of Faces and skim through everything, usually to find myself stewing in my own frustration.

(Maybe I do that on purpose— going somewhere and reading stuff that I know will make me angry because I need something outward to direct my anger toward so it doesn't collapse inward. Maybe that's why everyone feels qualified to rant about politics, because it's a more acceptable form of aggression than punching someone ugly.)

It's not that I want everyone to agree with me. I'm pretty liberal, but I definitely appreciate well-reasoned arguments for small government when they actually come around. However, most of the political opinions I see are just so poorly reasoned! Opinions on all sides of this current Chick-fil-A madness have been so frustrating to me that I actually jumped in and posted this:

"With every purchase you make, you are voting with your dollars. Not just when you buy something from a company that's recently gotten bad publicity or is the subject of numerous Facebook memes, but EVERY time you buy something. There are so many issues to think about when you think about what companies you're supporting: fair labor practices, environmental waste, treatment of animals, use of carcinogenic chemicals… and yes, treatment of LGBT folk, to name only a few. I'm glad the Chick-fil-A issue is raising people's consciousness of what their purchasing power can actually do, but one CEO's insistence on "traditional marriage" is not the only hill to die on. And I don't eat chicken anyway. :)"

Amazingly, people on both sides seemed to appreciate it. I'm kinda thinking this is my cue to jump in and try to say things that are somewhat sane rather than just sitting back and trying to make things better by staying out of it.

And you know what? I'm already involved in politics. I eat vegan foods, a lot of which are organic and local, because I want my food choices to reflect my values. I use my bike to commute because I think that self-propelled transportation is a step we need to take toward sustainability. I'm a feminist (more about that some other time.) And I write songs that …

I've often wished that I knew how to write a good protest song à la Guthrie, Dylan, DiFranco. But my music is already political! It might be subtle, but I write about gender relations, struggles with religion, how love is the same no matter who I'm dating… And I'm a woman using my own voice and making a career for myself.

I guess maybe that does mean I'm qualified to talk about politics. Maybe we all are. Isn't each of us having our own voice the very point? ;)